Choose your meal from a diverse network of 400+ restaurants.

Choose and order your favourite food from menu

Indulge in delicious food delivered at your seat

Train food delivery at BILASPUR includes local delicacies and a wide variety of meals from famous local eateries at Jhansi from premium outlets such as:

Order food in train without having to worry about hygiene. We bring to you 100% safe, hygienic and lip-smacking food packaged and delivered at your train seat/birth by safest hands. We have partnered with over a network of 400+ FSSAI approved restaurants, and ensure all the restaurant kitchens are clean and fully sanitized as per safety measurements by relevant authorities. Our kitchen staff, delivery partners are medically certified and follow regular temperature checks. 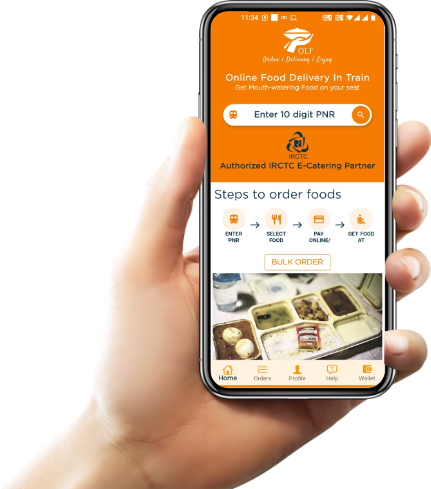 We have a launch team that focuses on one city at a time. At the end of the day, we're a marketplace. In order to make an effective marketplace, you need critical mass. We need enough restaurants that quality and variety.

Below are answers to some of the most frequently asked questions from travellers about ordering online food order in train. OLFstore is here to answer all your doubts.

How to get food in train from OLFStore?

Order meal on train from OLFStore through three easy ways. Either visit OLFStores website, or download OLFStore app, or connect with our team by calling on +91-9522996999. We provide food deliveries across all the major railway stations in India

Why choose food delivery in train from OLF Store?

The answer is simple, we have a network of over 400 restaurants and provide fastest food delivery at your train seat. We offer a wide variety of train food service, since we are an IRCTC authorized E-catering partner we don’t compromise on quality of food. Our food is neatly packed and 100% safe and hygienic.

Yes, it is absolutely safe to order food from OLFStores even during covid19. We are committed towards providing our customers a memorable food experience coupled with hygiene and safety. Our kitchens are fully sanitized, we prepare hygienic food in restaurants approved by FSSAI, kitchen staff and food delivery staff go through a regular temperature check. While face masks and gloves are absolutely necessary. To prevent any kind of contact, you can pay online and our delivery partner will provide you with a contactless delivery on your trains eat.

How do I book food in train OLFstore?